When working with the Mono.CSharp Evaluator, you can define some variables and then use them later on to evaluate other expression. Here is a simple example:

It defines a variable i and then sets it to some value. On the console, you will see:

There is unfortunately no method putVar(…) in the Evaluator class. Also the repository for variables which is internally maintained by the Evaluator is not exposed to you. But at least it does exist. So this means we’ll need some reflection to get to it.

First let’s have a look at the internal data maintained by the Evaluator: 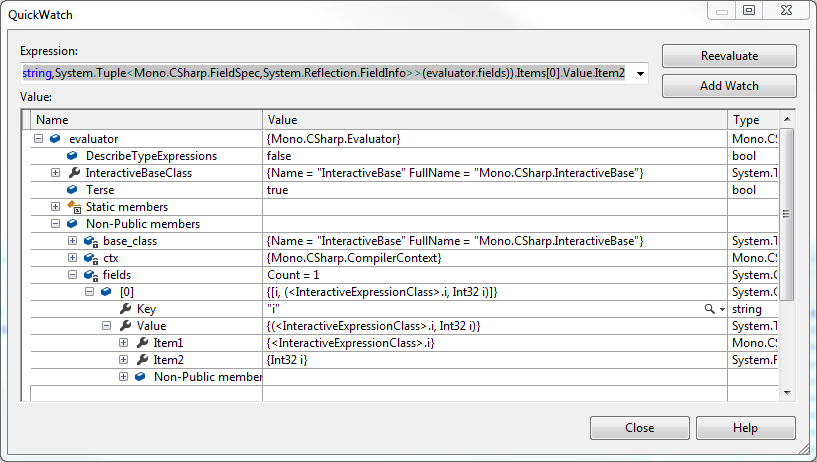 So the Evaluator has a non-public member called fields which is a collection of field definition/values. So what we need to do to set a value is either directly had an entry in there or modify an existing entry. Adding a new entry is kind of difficult because you need to define a Mono.CSharp.FieldSpec as item1 and this is no piece of cake. So our best shot is to use the Run method to create a variable. Once it is already in the fields member, we just need to update its item2 to the value we want to set.

First let’s get the fields member. We know it’s a non-public instance member so we can find it like this:

Now we have the dictionary, we need to find the entry for our variable:

And then we can set item2 to the appropriate value:

That’s it. Putting it all together, you get the following code:

And as expected it writes int i=6 to the console. Of course in this case it makes no sense to do it this way as you could do it as shown at the beginning of the port with one line of code. But with this approach you can set values which are very complex and cannot be fully converted to a string.

If you do not like this approach, there is a question on StackOverflow which provides a few different ways to handle this issue.

Here is a short explanation as to why I did not use any of these 3 solution approaches:

So if you are not afraid to use reflection, need to be able to have multiple Evaluator instances in parallel and do not want to have the interpreter have access to the factory used to generate objects, the solution approach described in my post is the only one I can thing of.

One thought on “Setting the value of a variable in the Mono.CSharp Evaluator”