Last year Google released new Adsense responsive ads which were bitterly missing until then. Displaying Skyscraper ad unit has never been a problem since they are 120 to 300 pixel wide and should fit nicely in most responsive designs. But horizontal or rectangular ad units (especially the popular Leaderboard ad unit) are more of a problem.

Until now, there was no easy way to display different ad sizes depending on the available screen width. So even though your mobile web site would reorganize all parts of the UI to display in a vertical manner if the screen is not as wide as on a desktop computer, your ads would still have the same width and your users will only see the left part of the ad.

Now, with reponsive ad units, you can have an ad shown depending on the width of the parent container. This is a new ad unit type. If you want to use it, you can just go to your adsense account and choose “Responsive ad unit” as “Ad size”: 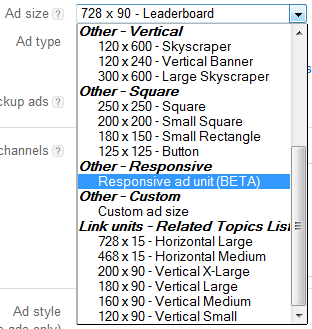 Then click on “Save and get code” (don’t forget to name your new ad unit first). Once the ad unit is created a dialog will be displayed where you can retrieve the code to embed in your site: 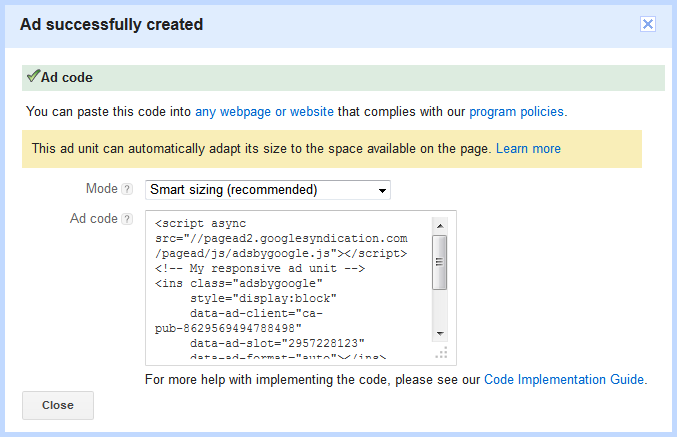 There are two modes available:

Smart sizing just means that Adsense will determine the space available and deliver an appropriate ad format. The code you will get will look like this:

The only thing you can adapt here is the ad-format parameter. It can take 4 values:

This code basically embeds the ad in a container which size you can manually set using some media queries. The first 5 lines of code are an example how to do it.

This first line defines the Mobile Banner (320×50) as the default ad size. If none of the media queries after that apply, this is the ad size you will get.

These two lines of code define that:

Since you will rarely have an available space which exactly matches an ad size, you will see that the ads are by default aligned left. If you want to center them, you will need to set a margin (and text alignement if you want to also center the text in text ads).

Centering can be achieved by setting the following CSS properties:

If you want to align the ads to the right:

If you want to force alignment to the left:

Note that the size considered by the media queries is not the actual size of the container but the screen size. So if your ad is displayed on an iPhone 5 with some margin, even the Mobile Banner will not fit on the screen. This is also what I observed on my blog so I added a negative margin to the default ad size so that the ad moves left over the margin I have for the rest of the page and thus fits on the iPhone screen: