A short description of how to change the keyboard layout from the console on different Linux distributions:

Use loadkeys as for SLES or OpenSuSE.

Note that you may first need to install console-tools by using:

If you are in a terminal window in X-Windows, it will not work and you’ll need to do the following:

As for Fedora, loadkeys should work. If not use setxkbmap.

I very often have to either find log entries related to a specific IP address or just find IP addresses in a log file or process a file containing IP addresses and other things. Here are a few commands I use for this.

First if you want to search for an IP address in a log file, you can just use grep:

Now if you want to search for lines containing IP addresses, you’ll need to use some regular expressions. An IP address is basically a dot separated sequence of 4 numbers each having 1 to 3 digits. So we can represent it this way:

If the IP addresses are stored alone on a line:

in your file, it will be matched although it is not a valid IP address (each part of the IP address cannot exceed 255). If you know you’ll never get such strings, then you can use the expression above otherwise:

If you do not want to allow IP address containing e.g. 001 instead of 1, you can replace the expression above:

“which” is a very useful command used to find the location of an executable which is in your path e.g.:

I actually didn’t know that there is also a command “whereis” which is kind of similar:

It doesn’t only return the location of the executable but also of source files and man pages. Another difference is also that it doesn’t search the configured path but looks through an internal list of common Unix paths.

So if you do not find an executable with one of the two commands, you should give the other one a try.

“which” stays my preferred command for this (and I’ll only use “whereis” if which fails to find something) because it’s just returning one full path without anything else which makes it so easy to combine it with other commands e.g.:

Of course you can also tell “whereis” to only show binaries and then use awk to get the output you need:

So combining it with cat:

But it’s of course much longer and more complex…

We recently had a problem with a SLES virtual machine which was copied and where the network connectivity was broken because we ended up being in a different network. So we needed to reconfigure the IP-Address.

The IP address configuration will probably get lost on reboot.

A permanent fix with yast:

Execute the following to check that it’s fine:

Then to check that the default gateway is properly setup, connect with putty.

Reboot the computer and check that everything is still OK.

I switched to a MacBook Pro 3,5 years ago. Until then, I’ve mostly had Windows machines at home even though I’ve always been more of a Unix/Linux guy. We still had a netbook which was delivered with Windows 7 Starter. I quickly upgraded to Windows Home Basic. Not sure why this Starter Edition even exists. It’s just an operating system with so many restrictions that any OS available 10 years ago would actually be better. Well, the netbook has an Atom N455 processor and 2 GB of RAM. As always with Windows, the longer the machine was in use, the slower it was getting and with this low spec machine, it was even worse. So yesterday, we got fed up with waiting all the time while planning our next vacation and decided to install Linux.

I first had a look at which distribution would make sense. I of course needed a low footprint distribution so that it can still run smoothly on this netbook which is already a few years old. Also I didn’t want to spend weeks trying to get all drivers working. Also I needed to be able to install it without an optical drive which I do not have in the netbook (and I didn’t want to spend hours looking for the external DVD drive I have somewhere in a box in the cellar). 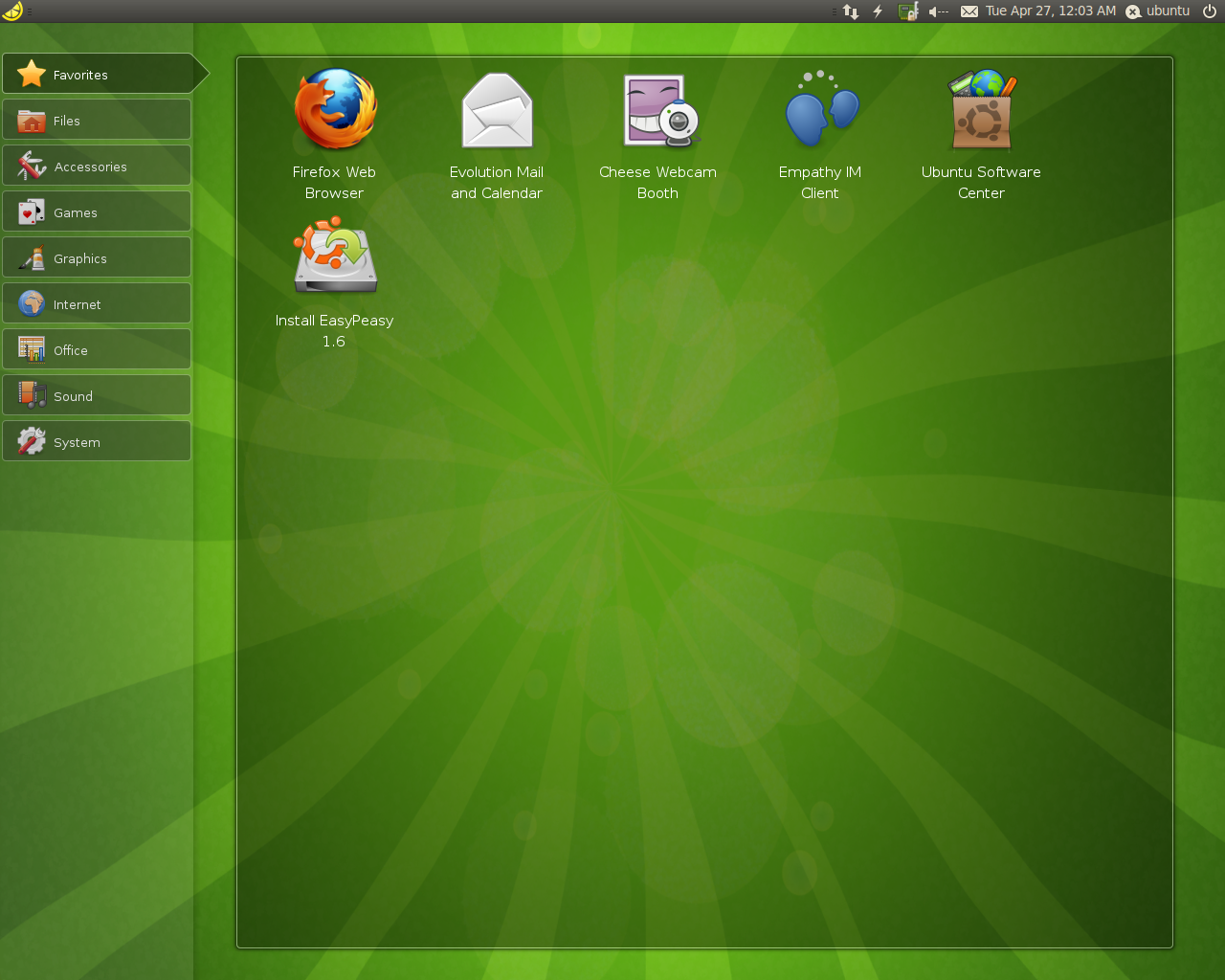 Easy Peasy is based on Ubuntu (so you can use the Ubuntu package administration) and was specially build for netbooks. It has a low footprint, the ISO is less 900 MB and it brings most drivers you need on a netbook. The UI is also optimize for smaller displays. It uses the Netbook-Launcher from the Ubuntu Netbook Remix and application windows are maximized and displayed without a title bar.

Easy Peasy also brings quite a few open source applications like OpenOffice, Songbird and Firefox. The nice update management makes sure that you always have the latest version of the different software.

You can write the ISO on a memory stick using UNetbootin. Like this you can also first test it and see whether it works for you before overwriting your previous OS. I had a small problem. My Wireless adapter needed a Broadcom driver which wasn’t part of the default package and needed to be downloaded. Of course without driver, no Wireless connection and thus no Internet to download the driver from. So I first had to find a network cable and connect the netbook directly to the router. Installing the driver was no issue at all and I only needed the network cable for a few minutes.

Easy Peasy is a further development of Ubuntu Eee but is now not only limited to Asus Eee PCs (although I actually do have one) but is meant to be used on any netbook.

I still need to test it a little bit more but I’m already very happy with the UI, the performance and the ease of installation and update.

I had the following problem. I was analyzing a dump of a Java process. There was a String object taking a few hundred megabytes of heap. I saved it to a file and wanted to look at it. This string contained a few hundred lines many of them were very long. It’s not so easy to scroll through such a file. Actually, only the beginning of each line was interesting since the rest of the line contained only a huge list of ascii codes.

Here is how you get only the first 30 characters of each lines:

It’s actually pretty easy ! Just love how much you can actually do with a one liner as soon as you’ve found out whether you need to use grep, awk, sed, cut, tr or a combination of them !

In a previous post, I’ve shown how to use SSHFS to mount a remote directory as a volume in Mac OS X. Of course the same can be done to connect two Linux boxes.

Here’s a short description how to do it on Debian.

Note that this will also install fuse as a dependency.

Then you need to have a public key authentication in place. I’m assuming that ssh is already installed on the server. You now should do the following, on the Linux box where the file system should be mounted:

Now you can generate a key:

Of course replace my email address by yours. You can then print the key:

This should be added to the file ~/.ssh/authorized_keys on the server.

Now you can connect using ssh without password and can mount over ssh:

Replace USER by the user for which you’ve setup the public key authentication.
Replace xxx.xxx.xxx.xxx by the IP address of the remote server.
Replace ~/amazingweb by the path where you want to mount the remote file system.

It’s basically the same command as under Mac OS X except that you have to remove the 3 following options which are not available under Debian:

If you need to quickly find the fastest Archive mirror to download Debian packages, you can either use apt-spy as shown here or use a tool called netselect-apt.

netselect-apt can be installed with apt-get:

You can then start it with the distribution (e.g. stable, testing, unstable, lenny, squeeze…) as parameter:

It is much faster than apt-spy and produces a sources.list file in the current directory:

netselect-apt is faster than apt-spy but supports less option and it is e.g. not so easy to select a region or country.

netselect-apt is also faster because it doesn’t actually benchmark the mirrors but just pings them. So the speed measurements made by netselect-apt are not as accurate as the one done by apt-spy.

Another difference is that netselect-apt automatically gets the latest list of archive mirror. With apt-spy you’d need to first run it with the update option.

apt-spy is a tool which tests the bandwidth of Debian archive mirrors and generates a file in /etc/apt/sources.list.d with the source list for the fastest mirror.

The most useful options for apt-spy are:

To check all mirrors worldwide and generate a sources.list file for stable packages:

Of course, if apt-spy is not installed yet, you’ll need to install it first:

Without using the -a parameter, checking the bandwidth of all mirrors will take some time.

Eventually it will find some pretty fast servers:

And some servers with issues:

When it is done it will write a sources.list file:

Next time you run apt-get update you’ll see that the new mirror is used.

Today I released the first version of MySQLBuddy. It is basically a fork of SybaseBuddy where I’ve removed a few things (for Sybase) and made a few changes for MySQL. So I wanted to fork SybaseBuddy in GitHub to a new project. Unfortunately it looks like GitHub doesn’t support this. It seems to assume that the owner of a project will not fork his own project.

Here is what I did to fork the project:

I first created a new GitHub repository: MySQLBuddy.
Then I created a clone of SybaseBuddy on my machine:

Now I had a clone but needed to teach it that it’s not linked to the SybaseBuddy GitHub repository anymore but to the MySQLBuddy repository. For this you need to update the .git/config in your clone:

Or simply edit the file and update the URL to the repository.

Now you need to push this clone to the new repository:

What you need to do is first pull from the repository before pushing:

You might also get there the following error message:

For some reason, I did the following before modifying the file:

But you don’t need to do it like this and can directly modify the file and pull.

After that you’ll be able to push: