OpenID Connect (OIDC) is an authentication layer (i.e. an identity layer) on top of OAuth 2.0. Client applications can use it to verify the identity of a subject (usually a user) based on the authentication performed by an authorization Server. It also provides basic profile information.O

Authentication is the process of identifying an individual e.g. using a username and password. This basically involves checking whether a user exists and determining who this user is i.e. associating credentials with an identity. Or in other words authentication answers the question “who one is”. OAuth is a specification for authorization and is not an authentication protocol but is used as a basis for authentication protocols like OpenID Connect.

Authorization is the process of giving a subject permissions to access resources in a certain way.

The resource owner is an entity which can grant a client application a scoped access to a resource. It can be a person (usually the end-user) but can also be a machine.

A client application is an application which accesses protected resources on the behalf of the resource owner.

The authorization server issues access tokens to authenticated client applications when permissions for the access are granted by the resource owner. This is the “OAuth2” server. 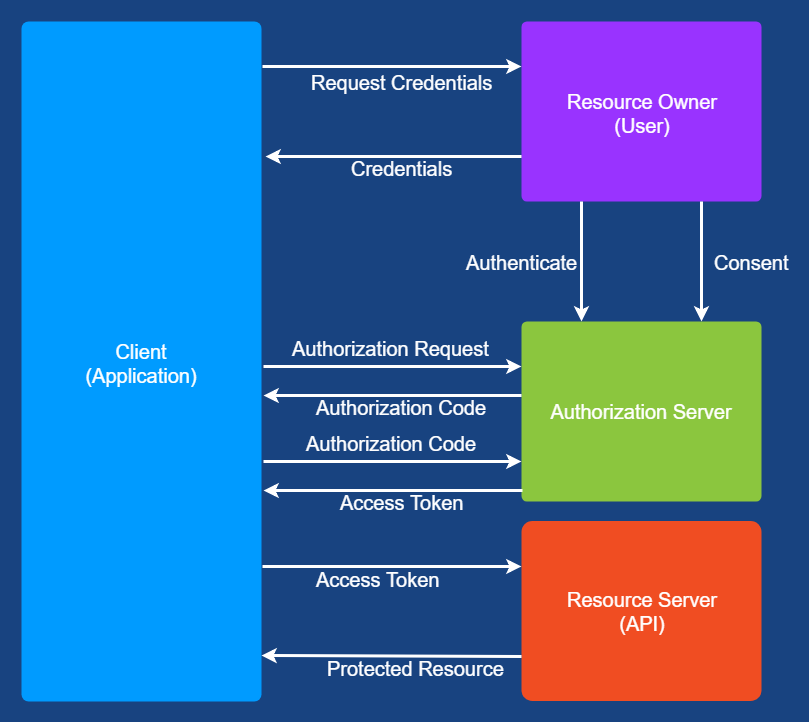 There are 3 types of tokens used when working with OAuth2 and OpenID Connect. Additionally, an authorization code is also defined.

In the token, each of these parts is encoded using Base64Url and concatenated using a “.” (dot) between them:

The body of the token contains a series of claims which provide data about the subject being identified by the token. The OpenID Connect specification doesn’t specify which claims have to be present in which context but does define “standard” claims (with registered claim names) and allows the use of custom claims. The registered claim names are:

This is how an ID token could look like:

Access tokens allow a client application to access a protected resource and defines the scope of this allowed access. This token is provided by the client application to the resource server when accessing the resource e.g. as an HTTP header. Just like the ID token, the access token has a limited lifetime which is defined when the authorization server issues the token to the client application. Since it allows access to protected resources, it must be kept confidential as much as possible although this is not always possible especially when a web browser is involved.

Authorization codes are codes returned to unsecure clients. These client can then exchange them with an access and/or ID token in a more secure way.

Scopes and audiences are used to handle multiple resource servers and multiple types of access permissions.

The JWT aud (Audience) Claim identifies the intended recipients of the token i.e. it allows an authorization server to issue tokens that are only valid for certain purposes.

An audience claim can either contain a list of strings (i.e. multiple audiences) or it can be a single string (i.e. there is only one intended audience). It does not matter if an audience value is a URL or some other application specific string.

Each recipient of such a token must validate that the audience specified in the token matches its own audience name. It must then reject any token that does not contain its own audience name in the intended audience. The authorization server which issues the token can only validate whether a token for this audience can be issued. It is the responsibility is the resource server to determine whether the token should be used or not. A resource server may choose to ignore the audience claim and accept any valid token.

So the audience claim is only useful if you want to issue tokens with different purposes (i.e. intended audiences) and if at least some of the APIs (resource servers) you are using are validating the audience claim.

Scopes provide a way to limit the access to functionality provided by the resource servers. The client can request scopes to be provided in the issued access token. The authorization server can provide all requested scopes, some of them or even additional ones based on its internal rules/policies. The provided scopes are written in the scope claim in the access token.

So they basically act as permissions. Authorization servers also use them when getting the consent from the user (i.e. ask the user whether he really wants to provide the client application access to these specific scopes).

When the client then uses the issued access token to request access to a protected resource, the resource server will validate that the type of resource and the type of access match the scopes contained in the access token.

E.g. if your access token contains the scope claim “read:posts read:comments write:comments”, the resource server would allow an application presenting this token to have read access to the posts and read and write comments but not to create a new post.

The following scopes are defined in OpenID Connect:

OpenID Connect defines 2 endpoints which can be used to request one or more of the token types described above:

In some of the flows described below (in the ones not requiring an authentication code), you might be connecting to either the authorization endpoint or the token endpoint (depending on you authorization server).

Additionally, it also defines the UserInfo endpoint  which returns claims about the authenticated user.

The authorization endpoint is an endpoint the user is sent to in order to:

The type of token being issued depends on the requested response type.

The token endpoint can exchange a grant (e.g. an authorization codeprovided by the authorization endpoint) for a token. The grant supported as input are usually:

The UserInfo endpoint returns claims about the authenticated user. This is an OAuth 2.0 protected resource so you need to provide an access token to access it.

Here is a sample response from this endpoint:

OpenID Connect defines an additional URL parameter called response_type. With this parameter, you can request different types of tokens to be returned. You can combine them by separating them by a space e.g. response_type=code id_token token.

The token endpoint will only return an ID token if scope openid is requested.

The token endpoint will only return an ID token if scope openid is requested.

This scenario basically maps to the OAuth2 Implicit Grant Flow.

A grant type in OAuth 2.0 refers to the way an application gets an access token. OAuth 2.0 defines several grant types:

Which flow should I use ?

Depending on which type of application you are developping and your ability to open a browser window or store client secrets securely, you will choose one of the flows above.

Note that when you have a native application without the possibility to open a browser window your only solution is to use the password grant but this solution is still not ideal since this forces the user to enter his/her credentials in your application. So this requires some level of trust from the user.

The Authorization Code grant type is used by web and mobile apps. It can only be used if the client application is able to open a web browser. It is considered more secure than the implicit grant flow because it doesn’t provide the access token directly in a callback URL parameter but provides a code which can then be exchanged with an access token from a web server or a native app. 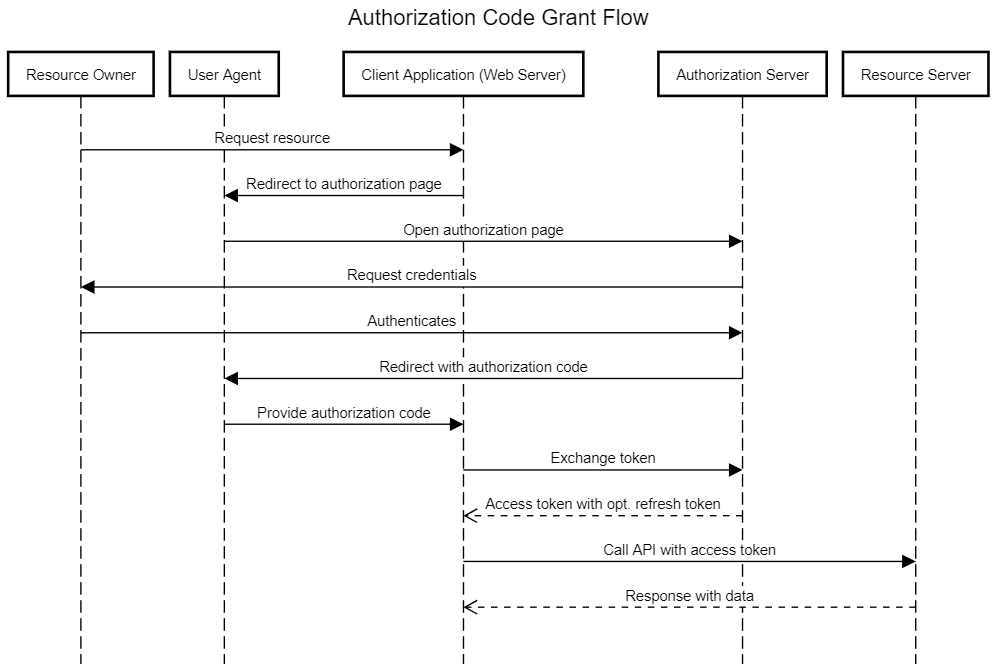 You can also see the authorization code flow with PKCE in action on the OAuth playground. 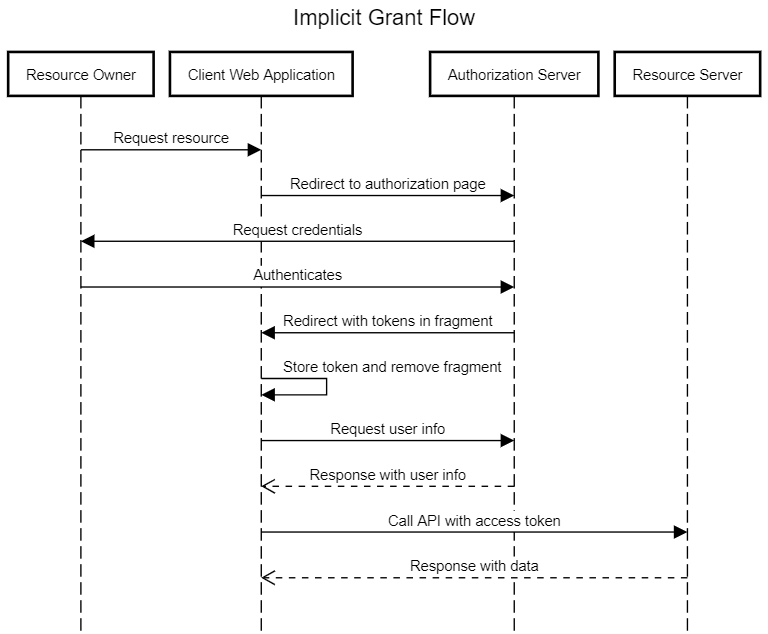 You can see the implicit flow in action on the OAuth playground.

The password grant is probably the easiest (and least secure) grant type. In this flow, the application needs to know the user credentials and pass them to the authorization server. 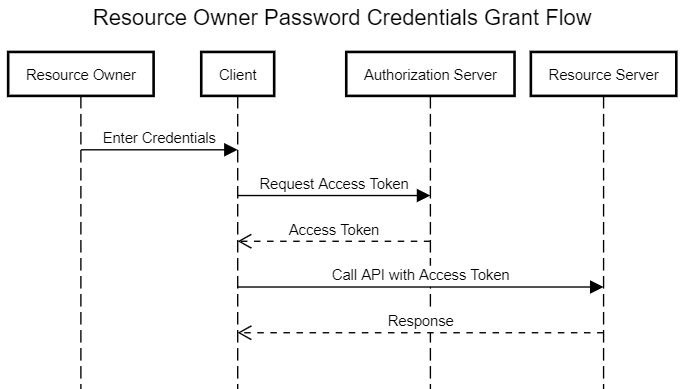 It is recommended to avoid this flow as much as possible. The main issue bing that the client needs to know you credentials. Imagine you want to allow the great benohead.com app to get your name from Facebook but you have to give it your password and trust the app will not start friending random strangers or posting inappropriate messages or just shut you out by changing your password.